The Day the Falls Died

On the morning of March 10, 1957, the gates along the powerhouse section of The Dalles Dam closed and Celilo Falls, age-old Indian salmon fishery and last stronghold of Pacific Northwest Tribes on the Columbia River, was lost to the sight of mankind forever.

“Once this was our land and Celilo was our falls,” murmured Mrs. Flora Thompson, wife of Chief Tommy Thompson whose people had maintained inherent fishing rights at the falls for uncounted centuries. “Now our lands and our fishing places are gone,” she said softly, “and soon we will be gone, too.” 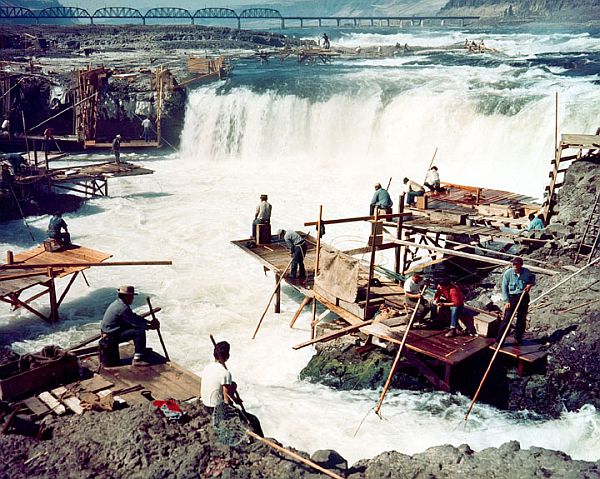 Flora Thompson was not alone in her sorrow on the day the falls died. Thousands of persons, some of whom had driven hundreds of miles, watched with concern and sorrow as the ancient and storied landmark slipped from sight beneath the waters of Cello pool.

I was there and I remember it as a day of deep and disturbing emotions. There was a solemn, uneasy quiet as though those who were watching were unsure that what they were witnessing was proper or right.

Uppermost in the minds of many was the realization that with the death of the falls at Celilo an Indian way of life almost as old as the river itself, was doomed.

Most of those watching on that March 10 day had white skins. But there were others. They came from nearby homes and open-end salmon drying sheds to look and ponder. They came alone, or sometimes in pairs, their moccasined feet shuffling through the tangle of automobiles and pedestrians that crowded Oregon’s U.S. Highway 30 where it passed the falls before the present four-lane freeway was built. 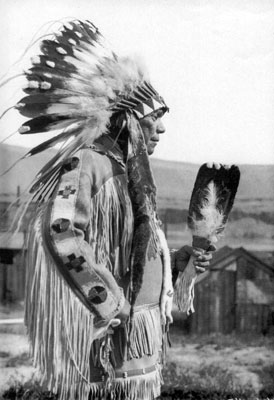 “The long hair tells the Creater we are faithful,” explained Mrs. Thompson. Faithful to the ancient traditions and customs of their ancestors; to their mother the Earth; to their friend and provider, the Chiawana or Columbia River, and to their brother, Nasau, the salmon.

This was hallowed ground, this land of the falls of Celilo. It was here in this area that man some 10,000 years ago found he could, with comparative ease, catch the giant Chinook and other food salmon as they milled and leaped in temporary confusion at this rocky barrier of tumbling waters and swift, tumultuous currents.

Those ancient ones left a record of their presence in the ashes of their campfires and the buried sanctuaries of their dead. They left behind crude tools fashioned from bone and stone, and skeleton remains of land and water creatures, some of which are now extinct.

At this place called Celilo where the mighty Columbia churned itself into a frightening frenzy of torrent and sound, there evolved an aboriginal market place without peer on the North American continent. Here, in the old, old days beyond the shadows of modern history, as many as 5,000 Indians would gather to feast, trade, gamble and participate in religious ceremonies.

A half-dozen tribes had permanent villages between where The Dalles Dam now stands and Celilo Falls. As many as 50,000 Indians are said to have lived and fished along vantage points of the Columbia River.

At the falls of Celilo at salmon time there were Indian goods from a third of the nation – wampum beads and abalone shells from tribes in California; buffalo robes and native tobaccos from the Great Plains; slaves and dried clam meats from those unscrupulous and canny traders, the Chinooks, from what are now the shores of Washington State at the mouth of the Columbia.

Here too were dried huckleberries, root foods, tule mats and horses from the Nez Perce and Cayuse, the Yakimas and the Klickitats. Then, too, there were prized dentalium shells gathered at great risk from the clear, deep waters of Nootka Sound on the west shore of Vancouver Island.

This, then, was the Indian world of Celilo. A fabulous land of plenty where Nasau the salmon was king and where the roar and might of the Columbia River were more majestic, the gambling more frenzied and trading more reckless than the Boston men with white skins who came later could ever imagine.

It was here at the falls of Celilo that Chief Tommy Thompson was born. Chief Thompson, now dead (he died in 1959 in a Hood River Oregon nursing home), was aged, wrinkled and bent by the time The Dalles Dam was built. His wife, Flora, sat by his bed on the day the gates of The Dalles Dam were closed. As the backwaters from the dam rose higher and higher, inundating his beloved falls, the old chief rolled and twisted in agony on his bed.

“More blankets,” he groaned in his native tongue to his wife. “The water is covering me up. I am cold.”

As a young boy growing up at the village of Celilo, Chief Thompson passed the ritualistic and physical tests of his tribe, the Wy-ams, and was allotted a permanent fishing spot on one of the narrow ledges that clung like spray to the vertical walls of the chute-like channels that siphoned off torrential floods of foaming, churning waters from the main channel. Fishing spots in those days were family possessions, handed down from father to son for generations. Commercialism and the press of new faces, evicted from their accustomed fishing spots by earlier dams and other man-made changes in the river, changed all of that in later years.

When Chief Tommy first began fishing at the falls he was 14 years of age and reached his spot by log raft or dugout canoe. But as Nasau the Salmon became a commercial commodity towers were erected on key islands’ of rock. Cables were strung from the towers and equipped with crude cable cars hat could speed fishermen and their catch across the foaming chasms.

In the old days, the Indians fished only to fill their needs. Now the dip netters swung their basket-like nets day after day and sometimes far into the night.

“Your white man’s gold brought greed to my people and to the river,” said Mrs. Thompson.

Now looking down from the overlook on Washington Highway 12 above Wishram in Klickitat County, there is nothing but silence and still water. Chief Tommy Thompson is dead, and when he died he took with him the last pure blood of the Wy-ams. The ancient voice of Celilo Falls has been stilled. Tourists traveling the Oregon side freeway whistle by the silent pool that once was Celilo Falls unaware of its glorious past and the sound and the fury that once were there.

On the morning of March 10, 1957, a fabulous way of life on the Columbia River came to an end. I sat in Chief Tommy Thompson’s old home.

Flora, his widow, sat across from me. We were drinking coffee. She lifted her cup to her lips, took a slow, thoughtful sip, then set her cup down. “The Indian and his way of life are gone,” she said softly. “The white man has changed the river. You have had your way. Your General Custer at last has his revenge.”